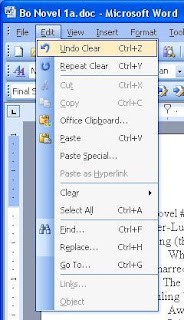 These days, just about every program has an Undo Command. This is the helpfulest of all computer commands, by far.

In Microsoft Office 2003 (and earlier) Undo is under the Edit Menu. Right above the Redo Button.

It’s also the backwards-looping arrow on the toolbar. If you keep hitting Undo, the computer will continue to undo each successive thing.

In Microsoft Office 2007, the Undo command is on the Home Ribbon. Still works the same way. 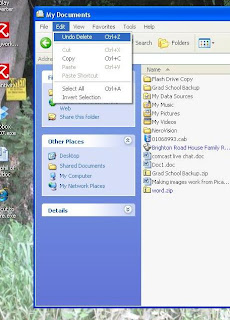 But, did you know that Windows Explorer (you may know it as My Computer or the My Documents Folder) ALSO has an Undo command! Yep. For WindowsXP and previous versions, if you go to the Edit menu at the top of the window, you will see and Undo command. It will refer to the last thing you did.

For my screenshot, my computer shows that “Undo Delete” is my option. It will put the last file I deleted back where it came from. You can also Undo a Move (so if you’re not sure where you actually moved a file to, Undo it and it’ll pop back to where it came from.)

Word of caution though. There does become a point when changes are permanent (unless you have Uber Computer Geek skills, like hacking and behind-the-scenes skills. Those are beyond MY capability!) So, do be careful with what you are doing. Undo is like a pair of Water Wings. Useful, but there are limitations.