The Brighton Mall is nestled in the corner of and I-96. Built in the 1970s, it was, once upon a time, a “real” mall, with the shops opening on the inside and you had to walk from store to store instead of the strip-mall (or “open air” malls) of today where people really and truly do drive from one store to another. Sorry. Moving on…

The Brighton Mall was anchored by K-Mart, which had its own entrance. It was also home for many years to the Little Professor Bookstore, a locally owned bookstore. Over time, including by the time I became a resident in the area, there wasn’t much to the Brighton Mall. Eventually, it was redeveloped into a Strip Mall. It’s now got only a couple big-box stores.

The K-Mart is now a Sears Essential, which is neither a K-Mart or a Sears and I’ve never found it much good for shopping.(The low number of customers in that stores seems to indicate others share my opinion of this concept. Especially when it’s an hour drive, tops, to a real Sears store out in Novi. Distracted again. Anyway, other stores include Marshall’s, Jo-Ann Fabrics and a sporting goods store. Two other strip

malls have been added, including one that has Best Buy and PetsMart. 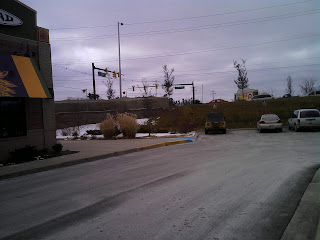 One of the interesting features of the Brighton Mall, though, is that it’s below grade. To enter the Mall from Grand River, there is a rather significant ramp. Here’s a shot with Panera Bread showing just how high Grand River is over the Mall parking lot. Curious. Not something I ever really though much about. It was just How Things Were. Until one day, while I was reading through some local history snippets, I found the reason why.

During the 1960s and early 70s when I-96 was being constructed, the road crews came through Brighton. Since Grand River was (and is) a major thoroughfare, of course the decision was made to build an overpass so I-96 would go over top Grand River. Well, that’s an awful lot of dirt to pile up. Can you guess where this is going?

>Yeah, the man who owned the farm there sold the DIRT to the state for construction of the I-96 overpass. They dug it out and left something of a hole in the ground. Well, this hole in the ground did not prevent the soon after sale of the LAND to a company interested in building a mall alongside the new entrance/ exit ramps on I-96.

These sort of stories are exactly why I LOVE local history.