Recently, I took a trip “up north.” In Michigan, this usually refers to upper parts of the Lower Peninsula (the fingers) or even to the Upper Peninsula.

My trip was a little of both. Originally, the trip up north included one of the few North/ South routes– first US 127 or US 23. Today, most people take I-75– the only limited access freeway heading to points up north.

I took I-75 part of the way, but since it primarily cuts through the center of the state, it’s certainly not the scenic drive. So, I got off I-75 and stayed with US-23 which still runs it’s old route to and along the coast of Michigan, the shore of Lake Huron. (The pointer finger of the mitten. No, I never get tired of references to my state being mitten-shaped.) 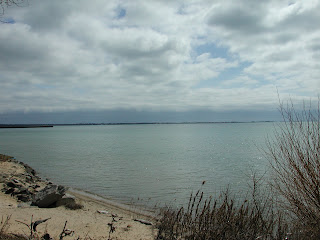 This meant that along the way, starting about Tawas, I got glimpses and full views of the large expanse of blue or gray (depending on the current color of the sky) that is Lake Huron. Luckily, while the weather was overcast most of the morning, by our arrival in Tawas, the sky was clearing. The lake reflected the blue, deepening the color of blue as the sky became less cloudy.

The first stop was in Tawas. 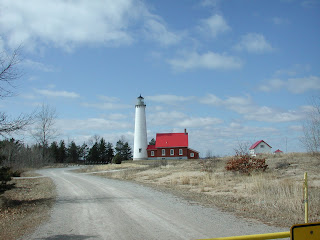 Then we went across the bay to the East Tawas Lighthouse. Unfortunately, the end of March is kind really “off-season” for such places. It wasn’t closed, per se. It was “self-service.” Yeah. We could walk around and take some pictures of the lighthouse and the point. 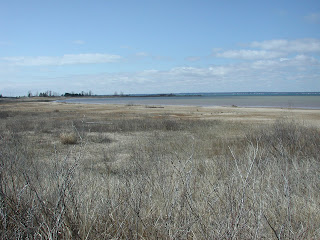 I read that the point often washes away during the harsh conditions of winter, only to be rebuilt again the following months. 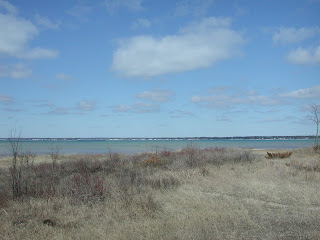 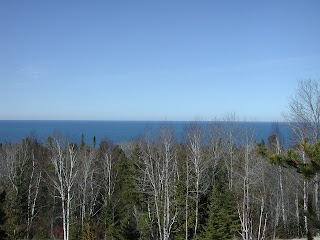 Later, further up the coast, we stopped at a scenic overlook.

And later still, along the shore of Grand Lake. This lake is shortly inland from Lake Huron. It creates the area known as Presque Isle– which means “Almost an Island.” As you can see from the map, the area is barely connected to the mainland. The big white area on the top and right side of the map is Lake Huron… 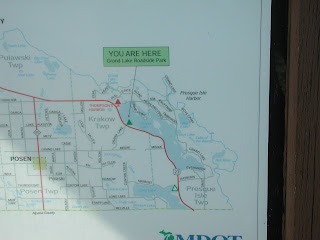 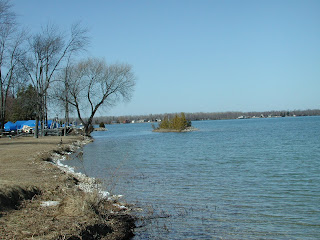 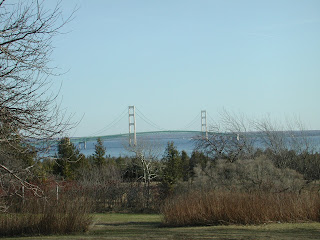 Then, we made our way past the Mackinac Bridge (pronounced Mackinaw) and into the Upper Peninsula.