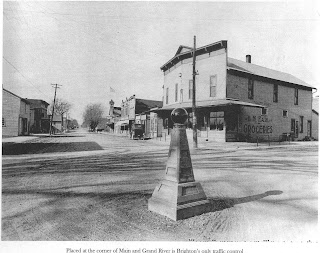 Across Grand River from the Eastern House Hotel once stood a grocery store.

Some time later, the building was torn down and a new store opened. Eventually it was the Brighton Drugs store. Later, in 1937, had bought the Brighton Drug store with Baldwin. For some time it was Leland and Baldwin Drugs. Then, Leland bought out Baldwin and renamed it Leland Drugs. 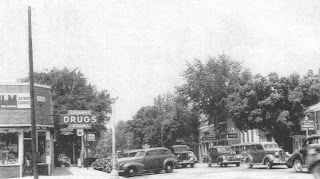 I believe this distinction came in the 1930s.

Tracing the history of a rather unremarkable set of businesses on this corner is quite difficult. The next information I have is that during the 1980s and 90s various eating establishments were attempted on that corner. One of the problems with that corner– at least in this modern era– is that parking is limited and not terribly convenient. There is a lot across Grand River, a few parallel parking spots, and another lot about a block away. These are not far or difficult, however, this is Livingston County, not Ann Arbor. Here, people don’t like to walk any farther than necessary. (See in Ann Arbor, you don’t drive. You find a place to park, and walk the several blocks. That’s just “How it is.”) 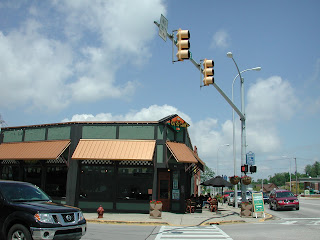 But, in the early 1990s, this corner of Brighton opened a new eatery. A place called Lu and Carl’s that has thrived. Thrived to the point where, in summer months, they have seating on the sidewalk. Like, right alongside Grand River where one can breathe in the lovely aroma of car exhaust and listen to the rumble of hundreds of cars rolling up to and eventually through the traffic light. (Um, you couldn’t pay me to eat on the sidewalk of Grand River, but anyway.) My never-humble theory as to why Lu and Carl’s has thrived while other restaurants did not is slightly cynical: Lu and Carl’s is the first eatery on that location to have a liquor license.