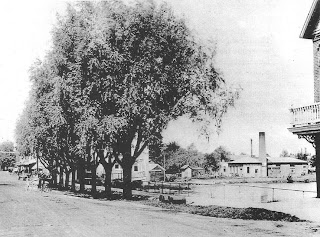 Brighton was a small town for a long time. Before there were suburbs, Brighton was just another town in the middle of nowhere.

And like many small towns, modern conveniences came slowly to Brighton. What did a bunch of farmers (and the shopkeepers who served the farmers) care for new fangled gadgets?

In 1902, CC Conrad constructed an electric-lighting plant along the Mill Pond in Brighton. In October of that year, he announced that he would run his plant from five o’clock until daylight every morning for a week. If it could be made to pay, he would continue all winter. (The building with the smoke stack was, from what I can tell, the power plant.) 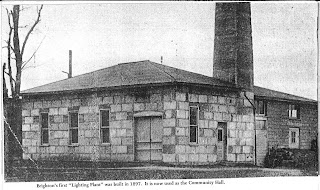 (Now, I read this as meaning that he would turn on the lights at 5am until the sun came up. Electricity had finally reached Brighton… but only for a few hours a day. What an interesting idea– to offer the service for only a few hours. I don’t think this sort of thing could possibly happen today.)

Apparently, this arrangement proved to be profitable. By 1913, Eastern Michigan Edison (likely a company related to the now-massive Detroit Edison electric company) took over Conrad’s plant. Meters were installed in every place using current.

In 1915, Brighton got all-night-electric service. About sixty lights were distributed throughout the village and were on all night, every night, all year.

I guess at the time, the idea of a lighted down town was new and exciting. Now, I wish they would turn the damn lights off. Especially those on the expressways. I have headlights on my car… what do I need street lights for? Esp. since these same lights are blocking out the stars. I like stars.

Anyway, electricity came to Brighton in 1915. In 1916, there was a curfew enacted. The bell on the townhall would ring at 8pm and all kids under 16 were to be off the streets. Wonder if the two were related… maybe with the lights on, folks could actually see the kids hanging out?

The electric plant is gone now. In it’s place is the Imagination Station playground.