Not only does little Livingston County have an airport– we have TWO! Yep. 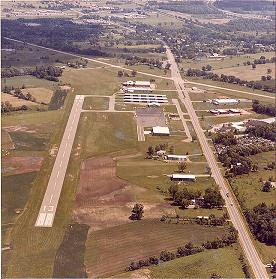 The “big” one is the Livingston County Airport out in Howell.

It’s over on the West side of Howell. Between Howell (the county seat and biggest city) and Fowlerville. Fowlerville has… well, not much. It’s got the Bloated Goat bar and the Fowlerville Fair.

<-- This photo shows the landing strip (the half-strip of ashphalt on the left.) The road on the right is Grand River Avenue. The road crossing the photo along the top is M-59. (This is an old photo--doesn't even have the 7-11 on the corner, let alone the newly constructed divided highway.)

Originally, it was much closer to the downtown area. An elementary school was built on the land in the 1940s , at which point the airport moved to it’s current location. It’s called the Spencer J. Hardy International Airport. 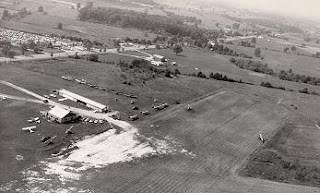 It was a big deal in the 1970s when the airport finally got a paved runway. This meant that the air strip would no longer have to close due to mud.

Yep, that’s small town for ya.

The airport mainly serves small planes, one and two propellers and small jets.

It also, as of recently, is home to the Survival Flight helicopters which are used to whisk the injured off to either University of Michigan hospital (or it’s nearby neighbor St. Joseph Mercy Hospital) in Ann Arbor or possibly to Sparrow Hospital, near Lansing. 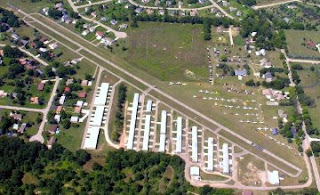 The other airport in Livingston County is over by Brighton. It’s a small airport nestled onto a back road not far from town. You’d never know it was an airport since it looks just like a grassy field from the road.

In fact, until I found this aerial shot, I didn’t realize that it was a full functioning airport. In my research, I found that it’s fully owned and operated by the pilots without government intervention.

And over on the Livingston County Airports webpage with airport history… I found this amazing photo. This happened a few years ago. If you look closely, you’ll see that it’s a double rainbow. It showed up after a fantastic thunderstorm. I was at work with Hubby, but we went outside and wished we had a camera. Someone at the Livingston County airport had a camera– and a truly unobstructed view of this amazing double rainbow. Click the link for a larger picture.

Sometimes I fine neat history, sometimes I just find neat things. Now… if only everything was on the internet.

Unfortnately, some of my readers don’t believe the things I’ve written into stories set in Livingston County. Who’s going to believe that a tiny county on the edge of suburbia will have TWO airports? The more I think about it, the more I realize that Livingston County is an place.

Travis Erwin is the man responsible for My Town Monday.