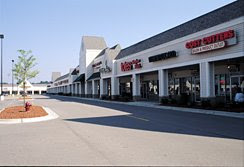 Like much of Livingston County, it was once farm field. Then the buildings sprouted… add water and a mall appears.

Originally dubbed the Kensington Valley Outlet Mall, it is part of the Tanger Outlet chain. It’s one of those ‘open air’ malls– with the stores forming a ring around the parking lot– which doesn’t make a whole hell of a lot of sense in Michigan. It get’s awful cold and snowy in a Michigan winter. But that seems to be the trend in new malls… I think it’s catering to those who’d rather drive to the other end of the mall than walk. And it irritates someone who’d rather walk. Anyway… 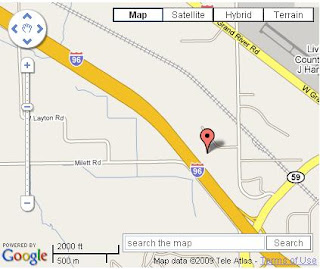 The Outlet Mall is at the junction between M-59 and I-96. M-59 terminates at I-96 and there’s one of the uglier intersections in the county as the entrance/exit ramps for I-96 East must be crossed to get to Burkhardt road to the south. (So you take the “entrance ramp” and turn off, or coming the other way, cross the entrance ramp to get on the “exit ramp.”) The whole intersection was redone to better serve the mall traffic.

Sadly, because the Outlet Mall is so far away from downtown Howell (about 4 miles of nothing between the two) I can’t imagine it does much for the city itself. There’s a McD’s and a few other restaurants nearby. So, I’m guessing most visitors to the mall don’t veture downtown. 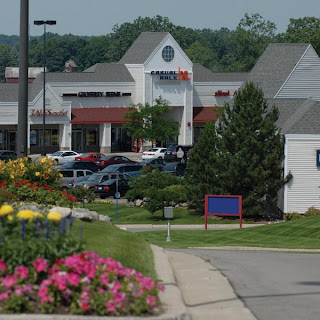 Another interesting feature of the Outlet Mall is that, well, not all the stores are acutally factory outlets… some are just regular stores. So you may not be getting a “Great Outlet Deal!!” But, hey, it’s the thought that counts. And as long as people think they’re getting a deal, they tend to buy as if they are.

But there are some great deals to be found there. A nice variety of stores, including a few that appeal to this picky shopper.

There’s a great food court in the center of the mall area (inside the ring) and nearby there’s a hotel for out-of-towners.