In someways, it seems clear that railroads were instrumental in the growth of some towns.

Looking at the towns in Livingston County one can see some interesting differences.

(Here’s a map for reference.) 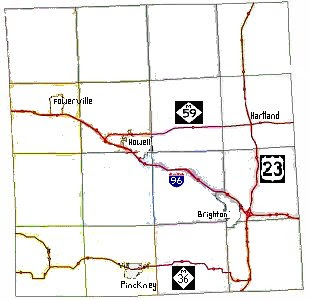 Howell started small, but saw a great deal of growth towards the end of the 1880s. In 1871, a railline was put in that connected Detroit to Howell, then onwards through Fowlerville and Lansing. Around that same time, Howell managed to get a second line running through the town, this one connected Ann Arbor with points North. This line runs pretty much along the same line that I-96 runs.

Howell was and is the biggest town in Livingston County. It has the largest downtown area. And I’m not talking to modern suburban retail shopping land sprawl. I’m talking honest to goodness, old-time downtown area.

Brighton is the second biggest town, and it sits on the same East-West railroute (now the CSX railway) as Howell. From what I can tell, Brighton grew slower. The main rail station and main destination seemed to be Howell. Brighton’s growth may have come later when auto travel became more popular and US-23 was built (in one or more forms!), running North/South along Brighton between Saginaw and Ann Arbor.

Hartland was a small village for a very long time. It is not near to any railways– one would either have to travel to Holly or to Brighton and make their way overland to reach Hartland. Hartland’s also not along any rivers. When US-23 was constructed as a limited access highway, the ramps were built north of the town at Clyde Road and south of the town at M-59. The M-59/US-23 junction has been growing with weeds– I mean, urban retail mall sprawls in recent years, but technically, it’s not really the village of Hartland, only part of Hartland Township.

Fowlerville was and is a small town, mostly rural. It seems that it was too far from Lansing for folks, (and WAY too far from Detroit.) The same railline through Brighton and Howell runs along Fowlerville, but it stayed a small town. Still a fair amount of farming up there, but too far from most jobs, I think.

Pinckney and Hamburg have both similarly remained small towns. These two towns were along the now-gone Grand Trunk Western railroad, that ran from Detroit to Jackson. There’s some evidence of the Pinckeny/ Hamburg seeing largely recreational travel. People from the cities would come out to Zukey or one of the many lakes. Many, many of the houses that were built along the lake shores are tiny, tiny houses built during the twenties. Perhaps many of them were just summer houses for the people getting out of the cities?

Hamburg had two stations, one for the Grand Trunk Western and one for the Ann Arbor rail, but remained a tiny town near the Huron River. Even now, the down town portion is reached by turning off the main road, M-36 and going around a 90 degree bend.

Today, Hamburg has been growing with suburban development. Pinckney, however, has seen only limited development.

The trains still run, occaisionally. They’re no longer any contributing or detracting factor to development. Well, of course the low-income housing is wedged next to the tracks. It’s interesting to travel out to Hartland, Highland and points east and notice the distinct lack of railways.

Clearly the lack of railways didn’t hinder growth as metro Detroit oozed it’s way east. Now, clearly it’s the proximity of major highways that helps or hinders growth. But one has to wonder why places like Hamburg never boomed– it had rails and the Huron River.

Come back in the next couple weeks to find out more about the history of Livingston County’s railroads.

Travis Erwin collects the My Town Monday folks in one place.