It used to be called Livingston Centre. Now, the city is called Howell. It’s small, for a city, but still the largest town in the county. Howell is halfway between Michigan’s largest city– Detroit– and the state capital in Lansing. 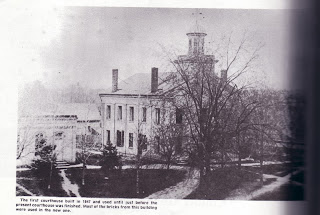 The courthouse was originally constructed in 1847. Before that, court was held at the Eagle Tavern, which also housed a bar (obviously), the post office, a grocery store, and the other important county functions. Legend has it, the drunks would be ecorted out in the morning to make way for court session.

The first court house constructed was a wooden building. When constructed, it was not only the courthouse, but housed the jail and sheriff’s residence on the main floor. Also, it served as a religous buildings for, as it says in the Howell Bicentenniel, “all but the Presbyterians who had their own building.” County and jury rooms were on the second floor. It was replaced several times. 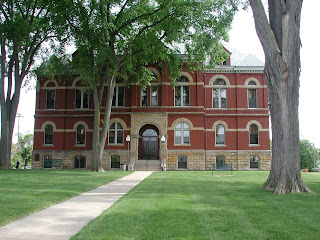 In 1889, the wooden courthouse was deemed unsound. A proposal was submitted to build a new courthouse, at the cost of $30,000. By this point a new jail and sheriff’s residence had already been constructed. The new building was constructed on the same land as the old, sitting one block east of the center of downtown Howell (formerly Division and Grand River, now Michigan Ave and Grand River. Howell doesn’t have a “Main Street.”)

The county courthouse is a grand and imposing building. Those doors really are ginormous. I’m thinking 10 feet tall, maybe. 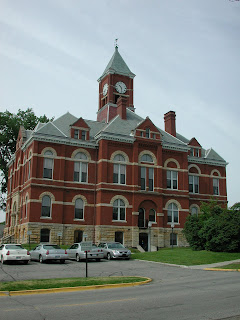 << Back view of the courthouse. The cars are parked right next to the building.

The courthouse is on the National Register of Historic Places. It was restored in 1979, with a narrow majority voting to keep the old building instead of tear it down for a new and “better” building, which was the trend at the time. 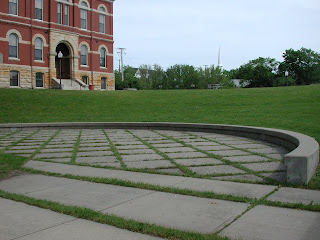 Beside the courthouse is an open air amphitheater. More county offices are houses int he building next door, as the 1890 structure isn’t quite sufficient in size. Though, you can’t quite compare with the grandeur of walking into the County Courthouse.

The courthouse lawn is often used for outdoor concerts and other events. And right on the corner is a Dairy Queen.

<< Courthouse on the right. View of Grand River, Howell, 1908. The trees were smaller then.

I’ve only been in the courthouse once. That was to get my marriage license. I could have spent all day nosing around that building, which is as spectatular inside as it is outside. Unfortunately, I have no pictures of the inside. It is still used today and hopefully will continue to be used in the future.