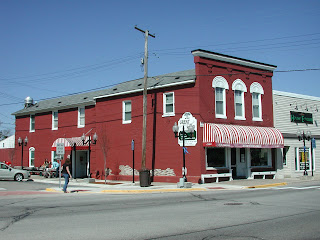 Nestled in downtown Brighton, there’s a little restaurant called the Yum Yum Tree. It’s easy to spot, being painted red brick and having a bright, cheery red and white awning out front.

The Yum Yum Tree is conveniently located right near the Mill Pond. This building stands next to the old Brighton Town Hall.

From what I can tell in my research, the building was built in 1871. Like many things in history, there’s no straight line. Especially for a not-particularly important building. According to the 1895 Plat Map of Brighton, this spot was where The Bank was. It’s only marked as Bank. In the 1880 History of Livingston County, it states that there was one bank, owned by B.H. Lawson in Brighton. Other historical records show that G.J. Baetcke purchased the bank from Mr. Lawson in 1891. My historical research was severely hampered as the library is only open for a few hours on Sundays. And they won’t let me move in and live in the local history room… maybe it’s the way I drool when they unlock the door. 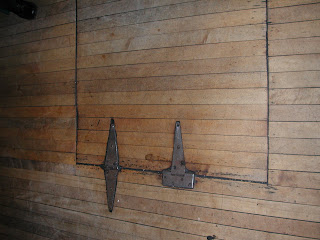 To enter the Yum Yum Tree, go around to the side. There’s a nice sloped entrance there, replacing the front entrance, which has steps… as it seems was common on old buildings. Inside the Yum Yum Tree, the original wood floor is there, looking worn but nicely so. There’s also a neat trap door that I don’t have anything but wild speculation for. (A bank… with a trap door in the floor… hmm. Anyway.) 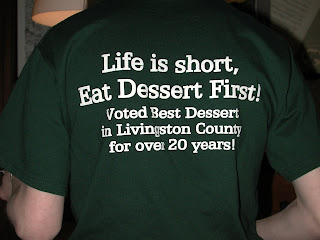 The Yum Yum tree has been around for over 20 years, a staple in Livingston County. They have a full menu, but some people honestly never get past the ice cream counter inside the entrance. Especially since this building is right off the Mill Pond, which, if you recall is home to the Imagination Station playground. There’s some other fantastic deserts there, such as the Mount Brighton, named after the local ski hill and the Turtle Sunday (which I recommend. Yum.) They’ve been voted the Best Desert in Livingston County for 20 years. 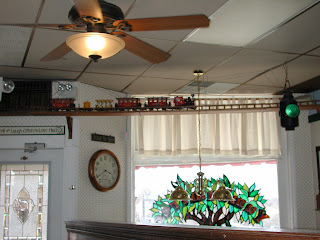 The full menu includes some fabulous food, though it’s hard to pay attention to food, even if they are delicious Belgian waffles with whipped cream and strawberries. There’s two big distractions awaiting patrons as they sit in the old booths.

The first distraction is all the stuff on the walls. My favorite are the historic photos of down town Brighton. It’s so cool to see what things used to be like. There’s also vintage decorations and warm-fuzzy wood plaques and old advertisements. 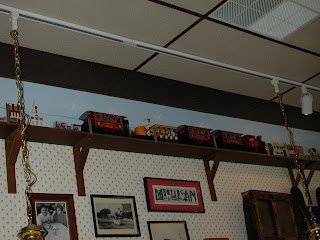 The other distraction is the coolest thing I’ve ever seen in a restaurant in all my days. The train. Near the ceiling, there’s a small train that circles the dining area. 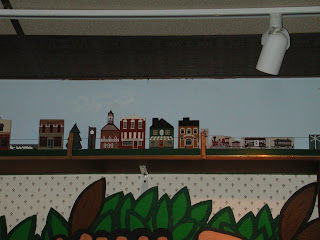 It chugs along past little wooden buildings… hey, wait a minute… those look like… yup. 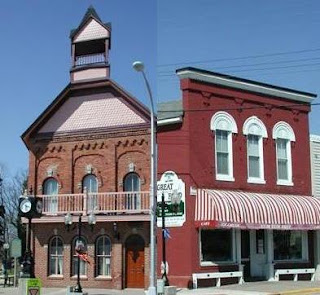 The little wooden buildings even include downtown Brighton. You can see the red building that’s the Yum Yum Tree and the Town Hall next to it. Okay, that’s too cool for words. 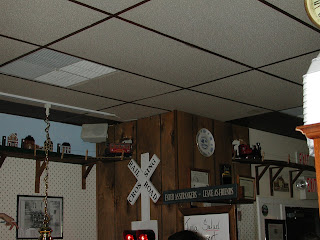 But that’s not all. The train goes through a tunnel over the cash register.

There’s six trains that are changed out during the year. The little train goes about 3.4 mph as it travels the 140ft of track around the dining area. The train has little whistle. Whoowhoo!

If you happen along in the Brighton area, you have to stop at the Yum Yum Tree.