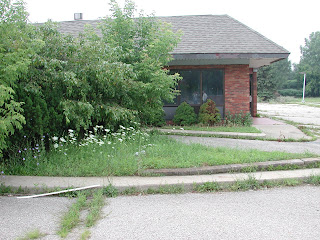 Yes, that really is what you think it is. An abandoned McDonald’s restaurant. The building has been empty for about six, seven years. It’s on the edge of Howell, just past the railroad viaduct. Beyond that, the town of Howell sags under the weight of the recession. 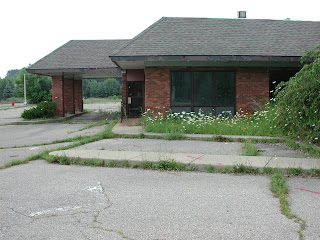 Michigan, as some of you may know, has suffered an economic decline that’s lasted longer and hit harder than many other places in the U.S. I think it was around early 2001 when the first rounds of layoffs at the automakers began making regular headlines.

Wave after wave of lay-off came rippling through the state of Michigan, affecting everyone.

Both downtown Howell and downtown Brighton have an overabundance of space for sale or lease. Restaurants are closing down left and right, mostly small locally owned places. Things seem pretty bleak. And this building could be a testament to just how bad things are in Michigan. 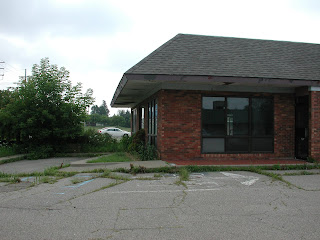 But, the McDonald’s was not a victim of the economy.

Nope. McDonald’s moved. Howell has for years been spreading outwards along Grand River, heading east and west, but then something changed. A little intersection in between Brighton and Howell, where Latson Road meets with Grand River, development sprang up.

First, there was just a few things– a plain Wal-Mart, a lingerie shop, Art Van Furniture and a few assorted other places.

Then, like most places that suddenly sprout, all of the sudden, the intersection came to boast three chain restaurants, a Super Wal-Mart, a Meijer (Wal-mart competitor), Lowe’s, Staples, and… McDonald’s. This is only a few miles from the now-empty building. So, they moved. The Laston Road McDonald’s is that new swanky “Not McDonald’s” look with the flat screen TVs and everything. And it’s in a much higher traffic area.

In fact, the old building is gone now, too. It’s been replaced by an Aldi’s.

Things may be rough in Livingston County, but life goes on.

Sometimes things are not always as they may appear. And thus, is fuel for my overactive imagination. It’s also good fodder for playing with the camera.