In Downtown Brighton, there is a Mill Pond. This mostly man-made structure is a scene of tranquillity. 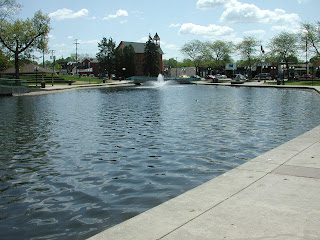 And a scene of controversy.

Because on this shore is THE NAKED GUY. 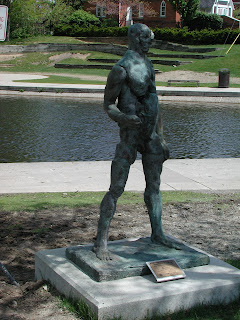 And he doesn’t have any clothes on!

You could see his “willy”, his “wiener”, his “unmentionables”– his penis. (Man, I could totally go on… there are so many names for this one piece of anatomy it’s crazy.)

If he really had them, of course.

The statue is about as well-defined as a Ken doll. Not quite androgynous, but barely lumps.

But, nonetheless, there were protests and outrage (OUTRAGE!) that this statue was placed here, purchased by the City of Brighton from a local art show.

The outrage was that this sort of nudity was profane. Furthermore, these uptight prudes– I mean, ah, overreacting busybodies, um, anyway… these folks were upset that the statue was facing Main Street.

This group of outraged citizens wrote angry letters to the paper. They went to the city council. In the end, they lost. Because there’s really nothing lewd about the statue. Aside from the fact that there’s not even any penis or balls to speak of on this statue, the city council (and much of the community) decided that neither the general public nor any kids would be scarred from seeing the statue.

Unfortunately, at the time the community didn’t realize that this was only the first kerfluffle a small group of local folks would make about ‘decency’ and ‘morality’ on a small quest to impose their beliefs on others. These folks also protested thongs in the window of the new local Victoria’s Secret. They also had a fit when the Intimate Ideas sex shop opened in Brighton. Luckily, this groupd has been distracted of late. Hopefully they’re teaching their own kids how to be good, responsible citizens who are respectful of other’s beliefs even if they disagree.

The Naked Guy, or Decision Pending as he was dubbed by the artist, still stands on the shore of the Mill Pond. Still mooning the folks at the Mill Pond and flashing the drivers on Main Street. In broad daylight. But most people don’t even seem to mind.

–>I plan to do posts on the Mill Pond and the Imagination Station in the following weeks.