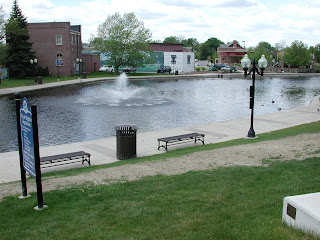 Situtated in the center of Brighton, is the Mill Pond. This pond was formed on Ore Creek a tributary of the Huron River. Once upon a time a mill was set up on the river, using the water power to work.

Sometime in the 1950s, it was decided that something needed to be done with the old Mill Pond. At the time, the pond was just a kind-of rock lined, filthy, body of water in town. Eventually, it 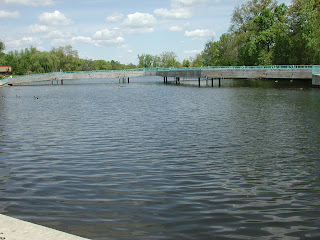 was turned into something of a local attraction.

It’s got sloped cement walls, abundant wildlife, a fountain, and the Imagination Station. (Like a playground but way better! But that’s for a future week.)

Across the center of the Mill Pond is the Tridge. It’s a three-way bridge. 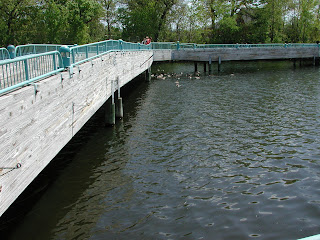 It’s a good place to feed the birds from. The birds in the Mill Pond are so accumstomed to being fed, that they nearly swarm strolling people. Without the beating of wings and such, but it’s pretty amazing to see a flock of twenty ducks or geese swimming at someone who happens to be standing on the Tridge. Even if there’s no food being dropped into the water. 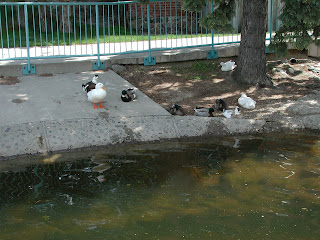 remember, not so long ago, that there used to be little gumball-like machines on the shore of the Mill Pond that dispensed corn for feeding the wildlife. They’re gone now, and I have to think it would be because folks wouldn’t want the wildlife dependent on people at the Mill Pond.


Clearly, though, living in the Mill Pond, as opposed to a regular pond, is a little different for wildlife. A couple years back, I recall spotting just ONE albino duck. Well, that duck has been getting busy. There are now quite a few albino and part albino ducks in the Mill Pond. Anywhere else, and I have to think these would be an oddly colored dinner for somebody. 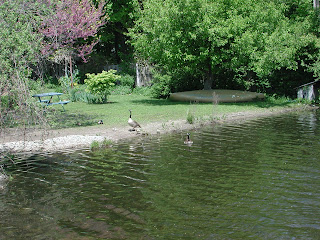 More wildlife. The ducks and geese seem to live more or less harmoniously. As you get on the other side of the Tridge, the Mill Pond is more of a natural waterway.

Since these pix were taken in late spring, there were quite a few fuzzy and “ugly” ducklings around.

There’s a swan or two on the Mill Pond from time to time as well. But they don’t usually play by the peopled end of the pond, choosing instead to hang out on the other side. 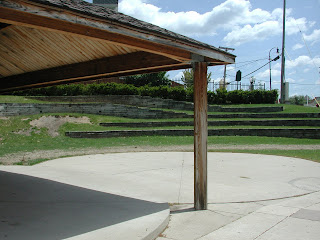 The Gazebo, on the shore of the Mill Pond, is used for all sorts of events. It’s a gathering place, convenient to town and parking. And peaceful– as peaceful as an oft-visited place in downtown can be. Even if it is the downtown in a little city like Brighton.

I know “city” is based on population, but to me, it seems impossible that Brighton is a city. Ann Arbor– that’s a city. Howell, maybe. But not the little town of Brighton.

The Mill Pond drains under Main Street. There once was a damn here, but it was taken out a few 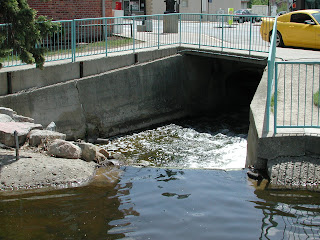 years ago. For a long, long time I wondered where the water went. In high school, I decided it must just go into the sewers, which seemed wrong to me.

Well, that conclusion was wrong. On the other side of Main Street, there is a large city parking lot. Beyond THAT is where Ore Creek comes out in a little creek that continues it’s path, eventually going under the CSX railway and emptying into Brighton Lake.

With all the birds that call the Mill Pond home, one ever present feature that can’t be overlooked 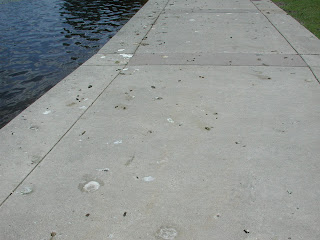 is the bird poo.

The city cleans the sidewalks regularly, but one is still advised to watch for wet droppings and wash their shoes upon returning home.

For years, the Mill Pond has been an attraction in downtown Brighton. A park has always sat on the shore. I’m just old enough to remember the park with the big metal slide (yeah, that would take off some skin on summer days), the swings, the merry-go-round (remember when those weren’t an Evil that had to be eradicated?)

Don’t forget to see Travis Erwin for other My Town Monday posts. Travel the world from your computer. No motion sickness or lost luggage.