When I was little, there was a small playground on the shore of the Mill Pond. It had tall swings, a big slide, and a merry-go-round before those things were contraband. It was sufficient for playing while Mom was milling about the Farmer’s Market looking for vegatables. (Oh joy.)

Once the bookstore moved in to one of the shops on the Mill Pond, that had more appeal to me. 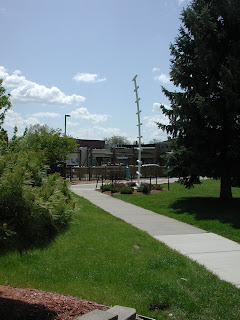 Actually, the tall white thing that looks nice for climbing is just a piece of art. A scultpure purchased by the city the same time as the Nake Guy. I’ve never spotted a kid climbing it, but I surely would have. Seems like they should have picked something that didn’t look like playground equpiment next to the Imagination Station. 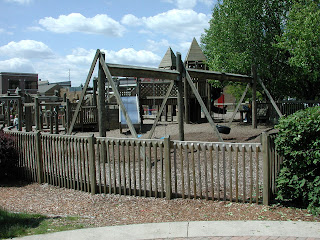 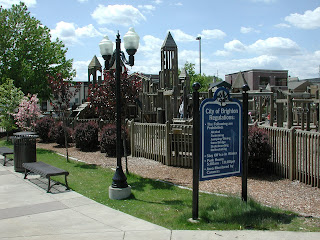 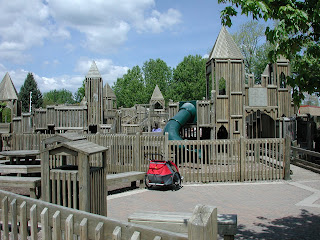 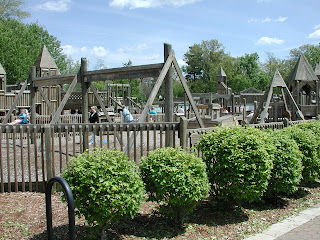 10,000 square feet of playing, climbing, swinging fun. The only downside is it’s often crowded. But I’ve been there more than a few times during twilight hours to run and romp. When I won’t knock over kids.

One evening when we were just dating, Hubby and I went out to the Imagination Station– one of the first signs he had of my … eccentricities. We played tag. Being more than 3.5 feet tall, I would have been better suited to staying on the tops of the towers where the sky’s the limit. Instead, I decided I’d hide in one the dark lower levels. No more than a few feet down, I nailed my head on a support board. The stars came out… and I didn’t really want to play anymore.

It gets better– as we were leaving, a cop came roaming around to make sure that, ah, no one was in the park after it closes at 10pm. It was 11 or 12 at the time. Hubby still makes mention that this encounter with the local police should have been a warning sign to him that I was trouble. =)


Visit Travis Erwin for other My Town Monday posts.