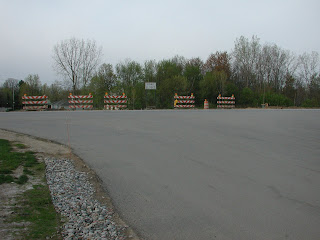 Since last summer, the major thoroughfare that I use everday to and from work started it’s metamorphosis. They started by cutting down all the threes all the way down the road. At the end I don’t use, they completed a massive contruction project. Now, the construction had dominated the portion of the road I use.

Watching the new bridge be built from the ground up was pretty cool. The cranes in that picture are working on the bridge. It is being built along side the current bridge over the TSBY rail road tracks. 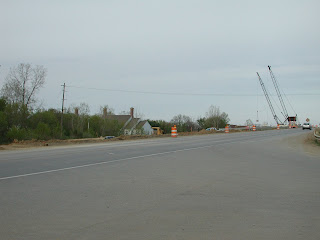 But there was one thing that nagged at me. The bridge was not wide enough. The word was always that M-59 was widening. In an earlier post, I explained that M-59 (as shown here) is primarily a 2 or 3 lane road. 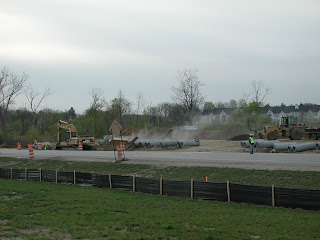 They’ve torn up the land along M-59, changed the traffic lights at the major intersection and begun serious work. Now, I’ve heard the jokes and seen the many road projects where the orange barrels seem to be doing the bulk of the work. Not true with this project. These photos were taken about quarter after eight on a Monday Morning. Already, the crews are in full swing, backing up traffic, moving dirt around. And they were working Saturday, too! It’s like Road Crew from the Twilight Zone. 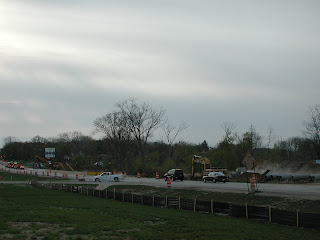 But what are they doing? All I had was a few bulletins that politely informed me that my route was going to be jacked something dreadful. Sadly, there is no good route to avoid this mess without heading several miles out of the way via dirt roads. Or going through town, if traffic isn’t backed up in the intersection over M-59. But I don’t much like going through town– it’s quite a bit slower than my normal route, even if I don’t get stopped by the traffic lights or the train. (ha! wishful thinking!)
Well, a little research on the Michigan Department of Transportation (M-DOT) website and I’m pretty certain that the stretch of M-59 that I use every day is being widened into a 4 lane boulevard. Four lanes= good. Boulevard= divided highway= Michigan Left= bad.
Ah, the Michigan Left. What is it?

Okay, well, not that bad. (Comic from xkcd.com). The Michigan Left is a specially designed roadway where in order to make evil Left-hand turns, a driver must drive past their road (hey wait! I was supposed to turn there!) Then, the driver will make a U-turn in the Mediam (only at specially designated areas). Then the driver cuts off– I mean, enters traffic and crosses lanes until they reach the right hand turn that takes them where they would have made a left onto at a normal, not screwed up intersection.

I borrowed this image from the Michigan Highways website. The Michigan Left allows the state to avoid those Evil Left Turns. And everyone knows that Left Turns are the 8th Deadly Sin. Seriously, though, I understand that left turns are the most dangerous thing one can do on the road way and road planners are trying to make for better driving. Given the increased traffic on this stretch of M-59, it seems ineveitable that they would create a divided highway.
As a divided highway, all the residential developments along with traffic from Howell High School would be able to make much safter left turns, particularly duing busy times of the day. Like from 8am until 7pm. With something of a lull just before and just after lunch.
My biggest problem with the Michigan Left is that I try to be an effecient driver. I don’t like driving out of my way to get where I’m going. Some stretches of divided highway I’ve been on (like the East side of Hartland where M-59 again becomes a divided highway, there are some looooong stretches without a mediam turn around.
I’d actually rather have a roundabout, myself. Not that most drivers around here are ready to learn how to use the several we have just yet.
The Michigan Left is much, much more common was one enters areas that are, well, closer to Detroit. As a happy habitant of Cow-Town and Little Cow-Town, I don’t think we need them stincking Michigan Lefts. All M-59 needs is a turn lane all the way down it. Traffic isn’t that bad that it warrants a Michigan Left.
But, like the five lane bridge that was built and used for three lanes, I’m sure this part of a plan for the future. The local government surely thinks that, in spite of the increasing numbers of foreclosures, vacant homes, and empty storefronts throughout town, that someday, Howell will someday grow again. This downward economic spiral can’t last forever.
The orange barrels are out in full bloom around here. And in MY way. 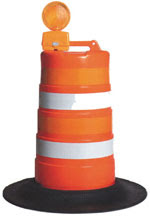 How are you enjoying Road Construction Season?
(Does anyone else have trouble with blogger funking up their post once they add any pictures? Oh my
And thanks to Travis Erwin. See him for More My Town Monday links.