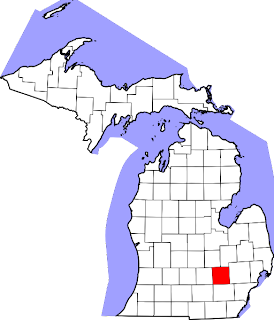 My little part of Michigan, happens to be still mostly rural, with a swathe of so-called civilization (or at least population) running along the middle where I-96 carves it’s path between Detroit and Lansing.
According to the last census records, there were more people in the city of Ann Arbor than their are in all of Livingston County.
A lot of people allegedly move here from the Metro Detroit Area. For me, the “Metro Detroit” area is pretty much anywhere east of, say, Novi. But, I’m a local yokel. The hustle and bustle of downtown Brighton or of the Latson Road interchange is more than exciting enough for me.
With the mix of rural life and city life, I get to see pristine Hummers and beat up pick up trucks with mud up to the mirrors and grass stuck in the grill. Which do you think actually went off-road?
Like Michigan’s weather with it’s range of possibilities, I find that Livingston County’s range of life rather interesting.

In addition to the mix of suburbia, small cities, small towns, and farmland, it’s a less than hour to get to Flint (north), Lansing (west) and Ann Arbor (south) where large cities dwell with even greater possibilities. Oh, and Metro Detroit to the East. Beyond that is Canada (which for Michiganders, hardly seems like another country at all.)

I’ve lived here my entire life, or at least all the parts of it that I remember. That counts as far as I’m concerned. This is my home. I plan to stay. (Crappy weather, potholes, and wretched economy and all.)