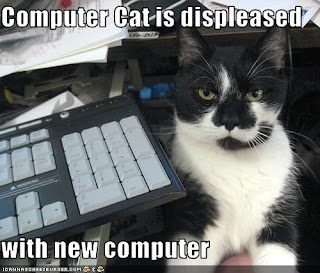 I hear a lot of complaints about Office 2007. The main root to all the complaints is “DON’T CHANGE IT!” Other complaints are “It’s too different” and “They moved everything” and “I can’t find it!”

With all those big buttons and labels and you can’t find what you’re looking for? If you say so… I found it easier to find things than previous versions of Office, actually.

On an unrelated note, I bought a new house this winter. It took me MONTHS to get used to the new locations for the silverware and the fact that I have stairs and other such things. I had to figure out where to put my furniture that worked, since the layout was very different from the old place. There are somethings that bother me because they aren’t how they used to be. And there are somethings that I would like to change because they just don’t work. Maybe it is related… Buying a new home is an awful lot like a major face-lift for software.

Perhaps the difference between buying a house and buying new software is choice, as people often don’t choose (or they choose to be unaware of the differences in) the new software. Many people I know who upgraded bought new software rather than using their old discs and installing the old, familiar software on their computers. Interesting… when I got a new desktop, the first thing I did was put my old programs back on it. This also saved money on buying programs, since I didn’t need new versions. But I’m cheap that way.

I encourage people who HATE Office 2007 to give it a chance. All your buttons are there. In fact, they’re even easier to find than before because they’re not hidden away. There’s also a lot more toys and features in the new versions of office. You’ve just bought a new house… take a little time to explore it– with an open mind.

And remember, argue for your limitations and they will be yours… if you insist that you can’t use Office 2007, that’s it too hard and too diferent, then, you will be right. You won’t learn it. Now, I’m going back to messig with the picture tools. Just don’t tell the boss that it took four hours for that brochure because I was playing…