Once upon a time, before Palms were big and Laptops were small, I purchased an HP Journada. It was an oversized handheld computer that ran WindowsCE with stripped versions of Office. And– the reason I picked this little device– it has a nearly-fully size keyboard.

I loved my little Journada. I named him Snoopy, referring to how the cartoon Snoopy would type away into the night atop his doghouse. And I would type away wherever I was. 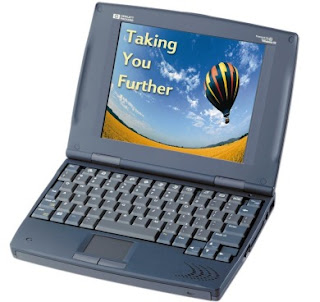 The Journada had this “nifty” program called ActiveSync. In theory, it would convert all the WindowsCE versions of files to normal Windows versions. In realty, it resulted in much cursing and finally in me just saving all my files as RTFs and using a flash card to transfer the data. In these early days, ActiveSync was a little buggy and a lot slow. My main problem was that it would refuse to sync, even though nothing had changed in the day since I last cybernetically connected the two devices. It would refuse, refuse, refuse. I’d unplug, plug, curse, kick, pull out hair, beg, clickclicklclick, run the troubleshooter. Then, sometimes, magically, the two devices would connect and sync happily. Sometimes, not. Hence the use of the Flash Card instead. And I didn’t have to wait for the files to convert.

Eventually, I abandoned my Jornada. It was the dawn of Flash Drives and the Jornada just didn’t have the software to run off a flash drive. With a flash drive, unlike my compact flash card, I could take my files everywhere and always have them ready to go. So, the Jornada was put into a box and the ActiveSync bid a joyful farewell.

ActiveSync is back on my computer. My new phone, which has Windows Mobile 6, includes ActiveSync for syncing calenders, contacts, documents and files. Well, it’s been a few years, so it can’t be as bad as it was. Heh. So I thought.

The good news is, after several hours and some internet research, my ActiveSync is happily installed and, so far, working as intended. Why so many hours? Because Microsoft Products don’t play well with Limited User. Yup. I run my computer in Limited User mode to reduce the chances of some data-munching or zombie-making virus. This is a Windows-included setting. But I couldn’t install or run ActiveSync on my Limited User account.

Now, don’t get me wrong. I like Microsoft products. But I’m not going to pretend they’re perfect. Neither is the Hubby and I still keep him around. 😉