Though, truthfully, out in Livingston County, I consider anything East of Wixom to be part of “Metro Detroit.” And as such, I prefer to avoid it like a sleepover of giggly pre-teen girls.

Out here, the significance of 8 Mile road is that… 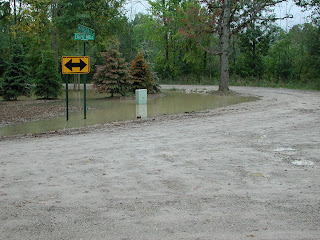 Here’s the end of 8 Mile– at Marshall. Eight Mile comes in from the left. The road curving away on the right side of the pic is Marshall. Here is the inauspicious end to 8 Mile Road.

And it meant so much in Detroit. 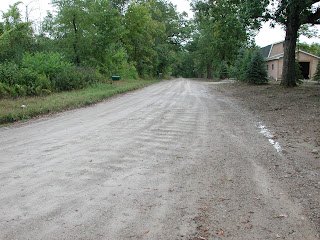 Not only is 8 Mile in these parts just another dirt road, it’s actually a barely-traveled dirt road that’s infrequently maintined.

It was so riddled with potholes that we couldn’t even manage 10 miles per hour without jarring out fillings and stopping to pick up parts that would fall of the car. (Well, parts would have fallen off except we had Hubby’s shiny new car not my monument to Michigan’s Love of Winter Salting.) 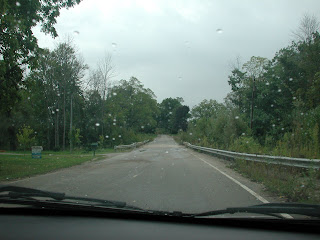 Out in the sticks, it’s always amusing to find a section of paved road in the middle of a dirt road. This section goes across a stream… which I can’t find the name of at this time. 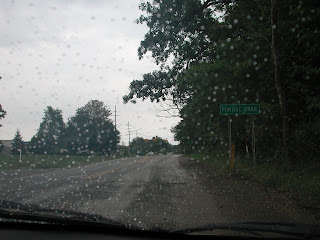 After Pontiac Trail, 8 Mile is paved and heads off to… well as far as I’m concerned it heads off into lands with dragons and such. It’s not part of my personal map. That’s East… towards Metro Detroit. Where roads have more than three lanes and there are… people.

According to Google Maps, 8 Mile heads off into Northville. 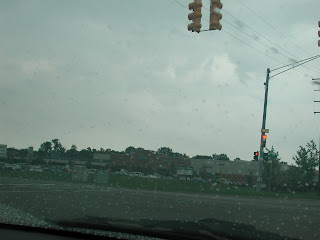 8 Mile is just south of the town of South Lyon. For many years there wasn’t anything at 8 Mile. It was just a stop sign outside of town. But now it boasts a traffice light and stores and stuff.

This shot is waiting to turn left at Pontiac Trail. Hubby was driving as we went to go play with my bothers. I have three of them. What better thing to do when the remnants of Hurricane Ike stroll into town than go play cards.

Out here 8 Mile is just another road. And if you’re heading into South Lyon, 9 or 10 Mile roads are better. So 8 Mile is a barely traveled road that few people even notice.