Skip to content
The third railroad to run through Livingston County was the Grand Trunk Western. In the 1980s, this train track was dismantled, leaving the rail bed through the county as a gravel trail. It ran through South Lyon into Hamburg and through the Pinckney/ Lakeland area and beyond.
Lakeland is no longer a place on the map, but it was a railroad station on the GTW and a resort destination on the shores of Zukey Lake. 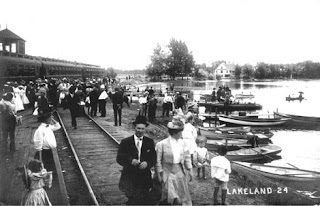 Before the automobile, there were quite a few advertisements in the papers for excursions to Lakeland, even with special rates for those who worked on the Ann Arbor Railraod.
(Picture borrowed from michiganrailroad.com )
With this picture in mind, I set out the other day to find where this is. The railroad station is gone, and the Ann Arbor Rail (aka TSBY) sees only the infrequent train. Also, the area looks quite different in 2008 than it did in 1909 when the photo was taken.
But I set out to the Zukey Lake area. 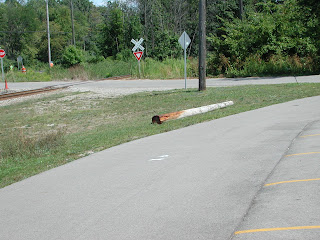 Looking east the ashpalt in the bottom right corner is the now-paved Lakeland Trail which was constructed along the old Grand Trunk Western line. The rail line is the Ann Arbor. 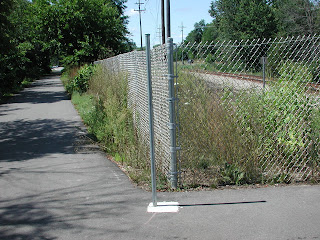 Further east, the Lakeland Trail crosses the Ann Arbor rail. But the crossing is not the diagonal junction that the rails originall made. I suppose with good reason. The new crossing is perpendicular– and all fenced in. The Ann Arbor is still a live rail line. Cross at your own risk.
(This photo is looking WEST) 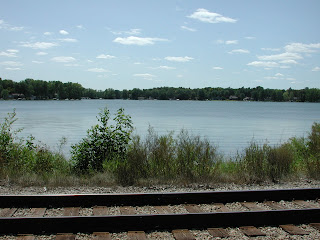 Shortly past the junction, the lakeshore clears and there lies Zukey Lake. Looking quite refreshing on a beautiful summer day. No beach hear, or line of boats anymore, but I’m pretty sure this is the shore where the 1909 passengers disembarked in the above photo. 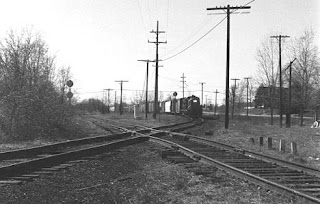 In the 1980s, this shot (again borrowed from michiganrailraods.com) shows the two railraods. The GTW was already abandoned, it was just a matter of time before the rails would be removed and the line left as a gravel trail. 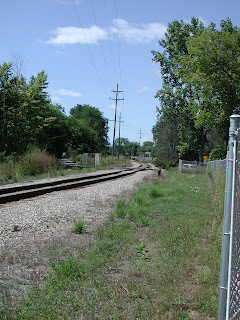 This is that same crossing in 2008– if you look closly at the rear of picture you can see where the metal fencing stops. That’s where the the Lakeland Trail crosses the AA line.
I’m standing (to take the picture) roughly where the Lakeland Trail veers off from the original GTW railbed. The line would likely have continued straight from where I’m standing, diagonally intersecting the AA rail.
Originally, the GTW and AA rail did not have seperate lines in Lakeland (as that junction was eventually called.) The AA line actually came up to the GTW line near Lakeland and joined with that rail for several miles before breaking off to head north. Then, as rail traffic increased, a separate line was created with the crossing shown in the photos. 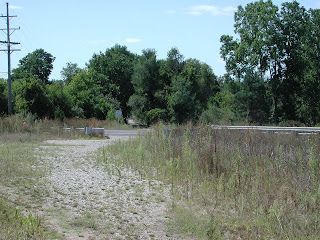 For most of my life the “Lakeland Trail” was really just an unofficial thing, with a handful of people who traveled the old railroad bed.
Most of it was just partially overgrown gravel. It’s curious to me that in twenty years, grass has still not completely overtaken the trail.
This spot here is where the trail crossed M-36, a two-lane thorough fare that is quite hazzardous most of the day.
From what I can tell, the project came about around 2005 with the trail being paved starting at near the township offices in Hamburg and continuing across Hamburg Township and into the town of Pinckney. 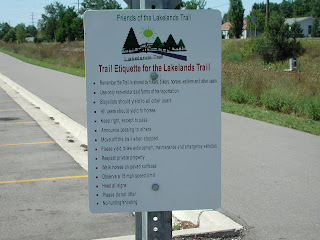 At some point the trail reverts to gravel. I didn’t walk/bike/ navigate the trail… I make no excuses– I just never have. 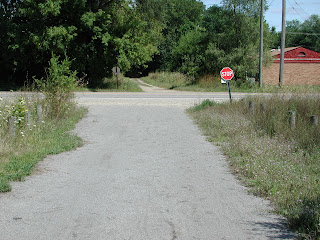 But I do know that when you get out to the abandoned Pinckney depot, the trail is gravel again.
This shot is taken looking East along the trail. The trail continues west at least through the tiny town of Stockbridge, and perhaps on for ever. 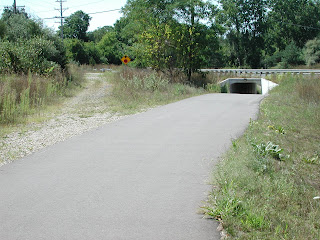 Along the way, the GTW/ Lakeland trail cross M-36. When the Trail was made into a linear state park, some foresight actually went into dealing with the problem of crossing M-36. A tunnel was built under M-36.
Which is also important because near that tunnel is Cap’n Frosty, our local ice cream shop. Last time I went there (gosh, I think I was still just dating my hubby…) they had the biggest ice cream scoops I have ever seen. The one scoop ice cream was the equivalent of a three scoop anywhere else. Don’t ask about the three scoop… 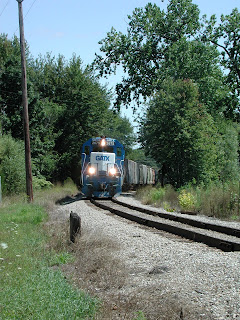 While I was out taking pictures, there was a(n all-too familiar) hoot. And a chug-chug.
A train came rolling on down the AA rail line. Some of the cars even had the letters TSBY (Tuscola Saginaw Bay) printed on the side.
That was too cool. 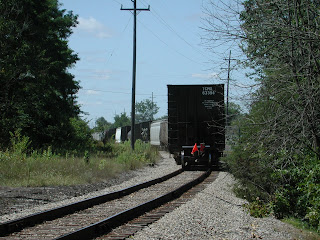 Even if there was no caboose… trains should have cabooses.
Hubby doesn’t understand why I think trains are cool… because the rest of the time I’m bitching about how I will never, ever so-help-me live next to a railraod crossing again. I maintain that trains are cool so long as I’m not living next to them. And besides the AA railroad engineers aren’t nearly as obnoxious as the CSX ones are at railraod crossings.
Check out Travis Erwin for other My Town Monday posts.