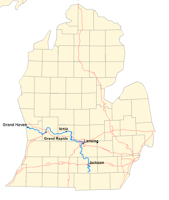 Like many original roads in Michigan, Grand River started as an Indian Trail. This road wound it’s way from Detroit through Livingston County, through Lansing, and off to Grand Rapids, crossing the state.

West of Lansing, this road follows along the Grand River. Over on my side of the state, we don’t have any Grand Rivers. Or great ones (ha ha). We’ve got the Huron, though, and that seems to do a pretty good job flooding much of Hamburg every spring… (pic shows Grand River in blue. The red lines are similar to where the Grand River Trail/Road ran.) 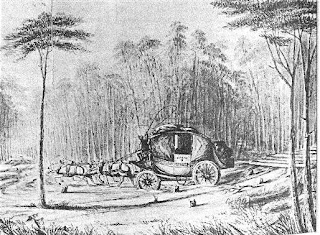 In 1848, Grand River Trail became a plank road. This was one of those bad ideas that took a while to get rid of. They would lay large planks (and sometimes just large branches) across the trail to make for a “smoother” ride. Because jostling a wagon over planks is going to be smoother than bumping over ruts and rocks. All that and you had to pay a toll to use the plank road.

Though, I’m thinking laying some planks might make Grand River Ave a little easier to drive along. Years of being barely maintained have resulted in some seriously crumbling road surfaces. The pot holes aren’t so bad, but it’s the lines that run with the road, making a chasm that grabs the car tire and tries to flip you into the ditch.

The Detroit & Howell Plank Road was one stretch, owned, if I understand correctly, by one company. There was another stretch called the Howell & Lansing Plank Road. This connected the major city of Detroit to the capital of Michigan.

With the construction of the railroads through much of Michigan in the 1880s and onwards, the plank roads fell out of favor. The companies who collected the tolls eventually disappeared and returned the roads to local control. Of course, the roads were in craptacular condition when the Plank Road companies left.

Here’s a gem of a quote from the Brighton BiCentennial: “By the year 1880, much of the planking had been removed and been replaced with dirt and gravel, but the toll gates remained to annoy and harrass those who were compelled to use this road.” I’m guessing that most local yokel would have tried to avoid paying tolls on Grand River. But long-distance travelers had little choice. Even today, getting from east to west without using Grand River (or it’s sucsessor, I-96) is a difficult, long, and winding trip.

After returning to local control, the Detroit to Howell and Howell to Lansing Plank Roads became again called Grand River. Now, though, it’s the Grand River Road instead of the Grand River Trail. It wouldn’t be until bicycling became popular that Grand River saw it’s next improvement… and it’s next name change. In the meantime, Grand River Road was a barely maintained dirt road running through the center of Livingston County. 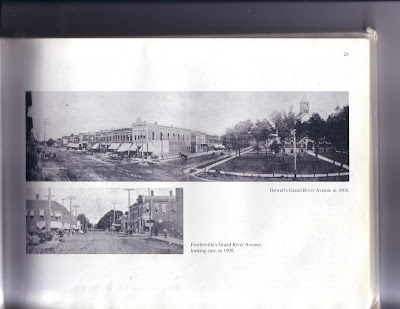 (Pic shows Howell on top and Fowlerville on bottom in 1908, looking down Grand River.)

While cities would have maintained roads in town, outside of town, for a many years, Michigan residents were required to maintain (grade and repair) the roads their property was on. And, the early 1900s saw plenty of people who didn’t see why they should have to. So, a road like Grand River would be in questionable shape as it ambled along between two important cities in Michigan.

Come back next week and see Grand River get an Amazing Makeover!

And don’t forget to visit Travis Erwin for more My Town Mondays!