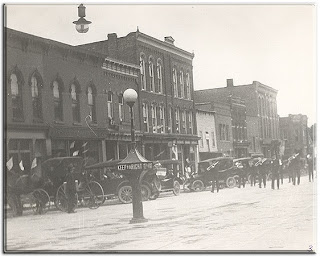 In the early 1900s, Michigan began naming it’s roads, in order to reduce confusion. Since many roads may or may not have names and those names may or may not change over the course of the road, the idea to give them one name for the entire length seemed like a good idea. The naming part worked, mostly. It was the road that was a problem

From what I can tell in my research, during the late 1910s and early 1920s, before Grand River became M-16, there were Auto Trails. These were named trails– by anyone who was selling their maps for auto tours. These trails were marked with ribbons wrapped on telephone poles (aka utility poles). There was such a proliferation of these auto trail groups that something had to be done. So the state stepped in and gave roads a name– one name that everyone was supposed to use. 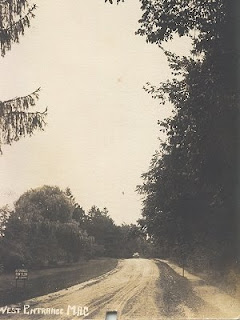 Grand River was labeled M-16. It still ran from Detroit (the biggest Michigan city) through Livingston County an onwards to state capital, Lansing. (Little trivia– Lansing is the ONLY state capital that is NOT a county seat. In Ingham County, the county seat is in Mason.) And, probably the more important part, the state began to put up road signs.

(Okay, I cheated. This is Grand River near Michigan State University, which is near Lansing.)

This half-hazard road-naming system kind of cleared up some confusion, except not all states took up this labeling thing. Apparently, the US government then stepped in to name roads. Or at least, the large ones that were important. Grand River was one of these. The US Highway System went into place in the 1920s. This system was set up not only to name roads, but also to improve them. There was considerable concern following World War 1 after the nations leaders realized/ learned that the road system in the US would be a great hindrance in warfare. While the roads might have existed on a map, they may not have existed or been actually usable in real life. 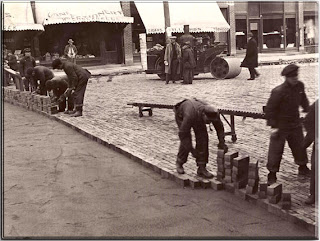 During the twenties, sections of Grand River are paved. In Howell, this was done in brick. Several of the side roads were also paved with bricks. While Grand River has been redone in the more modern, but less cool looking brick, there are still a couple streets that are paved in brick. One of those, interestingly enough is Walnut Street, north of Grand River. A little road that leads back to the historic Ann Arbor (Tuscola Saginaw Bay) railroad station and museum. I don’t think that’s an accident.

So, Grand River is paved. And it gets designated US-16. This US highway continues on into Wisconsin and onwards to South Dakota and Wyoming, with a little ferry trip across Lake Michigan.

And some years later, US-16 disappeared from Michigan as well. (There’s still a segment of this expressway out west.)

The US-Highway system helped to improve roads, but these were not “highways” as we know them today. These were largely just two lane– maybe up to five lane– roads. It was the Interstate highway Act that took away the US-16 designation, and gave Grand River Avenue back to Livingston County.

(Two things that I found out AFTER posting last weeks entry on Grand River Trail as a plank road. Recently, when major road work was being done on Grand River near Lansing, they found rotting planks buried deep into the road bed. These planks were some 150 years old! And speaking of the planks, Mark Twain is reported to have remarked on the plank roads in Michigan during a visit. When asked how is trip was, he allegedly said, It would have been good if some unconscionable scoundrel had not now and then dropped a plank across it.”)

Come back next week how Grand River got it’s groove, um, I mean, name back.)

Travis Erwin is having fun with his new house, but you can still get your My Town Monday links by visiting Jenn Jilks.