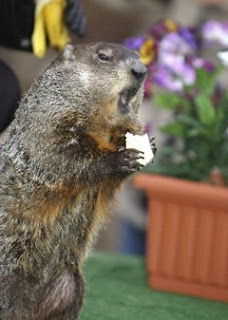 Everyone knows Punxsutawney Phil, the famous prognosticator from Pennsylvania. But Livingston County is home to a more accurate groundhog: Woody the Woodchuck. Maybe it’s because Woody is female. Women do tend to have better instincts than men…

Seriously, though Woody the Woodchuck, a resident at the Howell Nature Center, has been right seven out of nine predictions. And, seriously, it may be because female groundhogs would have a greater need to know if it was too early in the season to bring out their babies. Woody’s never had any babies, but she would likely still carry the maternal instinct.

At 8:15am on February 2nd, Woody will make her way out of her comfy home. If she stays out for more than 30 seconds, then that indicates an early spring.

I’ll come back after Woody makes her prediction, though, and let you know what Woody says about the arrival of spring this year.

UPDATE: Woody wouldn’t even come out of her paper mache log this morning, which means six more weeks of winter. Punxatawney Phil made the same prediction when he came out and saw his shadow. (Funny that puts it right about the middle of March… when the Vernal Equinox occurs.)

The rest of the year, Woody’s part of the Howell Nature Centers educational programs.

But Woody’s home is in danger. The Howell Nature Center is in dire straits. They may not be able to afford to continue operating. After 26 years, this may be it.

For those who don’t know, Michigan has been suffering economically for far longer than the rest of the nation. Our economy started sliding before 2001. We have yet to hit bottom in the mitten state.

While spring may be around the corner weather wise, Michigan is still locked in the icy grips of an economic winter. I don’t think Woody has any predictions on that one.

Travis Erwin has returned to corralling the My Town Monday posters. Stroll on over for more links.