Livingston County is one of those areas where the main roads are big enough, so long as it’s not rush hour. Most of the day, traffic moves just fine.

But it’s one of those places, like much of Michigan, that has some pretty abysmal road surfaces. ‘Tis the pothole season around here. Most of the roads are damaged by the freeze-thaw cycle. And further affected by the salt that Michiganders *must* have on their roads. Because, you know, just because it’s snowing doesn’t mean you should have to slow down. 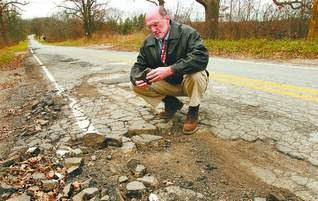 Here’s one shot (borrowed from the Livingston County Daily News). You can see the road is just disintegrating.

Reminds me of playing Sim City 2. Sections of road would just turn to rubble. 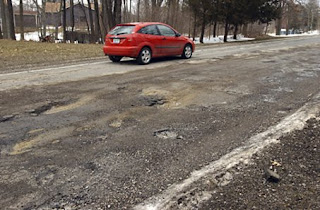 Here’s another. No, you’re not seeing that wrong. It’s one of those places where folks regularly drive on the other side of the road because their normal lane is in such bad shape.

Luckily, the worst roads are usually quiet enough that it’s not too hard to share the one good lane.

You know you’re in Michigan when you change lanes to pass potholes, not cars. 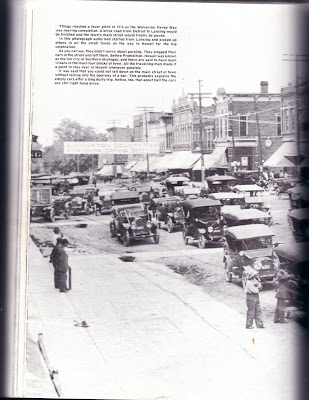 But it’s not nearly as bad as it used to be. Here’s an old photo of downtown Howell with a flock of cars travelling along Grand River Ave to celebrate the paving of this main cross-state thoroughfare.

Interesting thing in this photo– people would just abandon their car in the road. No special parking. They’d leave it and head to one of the many bars. 13 in four blocks!

Maybe that’s why the travelers didn’t bother to park? At other times, parking was a bit more orderly, but not much. 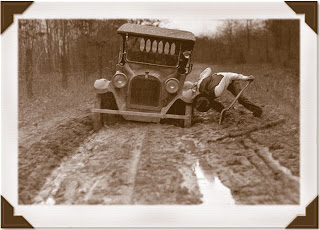 And here’s how bad dirt roads used to get.

A little perspective as we enter Bad Road Season (what some of the rest of you might just know as “spring.”) As the weather gets warmer and the snow melts, the water will get into the cracks in the asphalt. Then, overnight, since temperatures still drop below freezing, the asphalt is further cracked.

And dirt roads become mud soup as the long-frozen moisture is finally freed by the sun.

But then again, I’m never in a rush to get anywhere. And I like to enjoy the scenery. That is, when I bother to venture out of my little office. I mean, that is where my computer is…