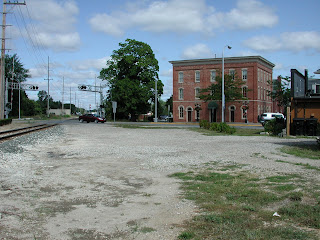 Next to the railroad tracks in Brighton, stands a slightly out-of-proportion brick building. It’s three stories, but not as tall as a three story building should be.

The building went up in 1873. Behind it was the train depot. It was on the western side of town and served as a hotel for many years.

This historic photo (“borrowed” from the Livingston County Memories book.) is looking east, over the tracks. Before Main Street was paved.

Tallest building around at the time! And a bustling hotel. 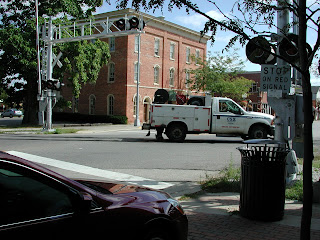 Here’s a similar angle, but much more recent.

Now, this building is causing some issues. Because the ceilings are not as tall as they should be for modern codes, updating the building is problematic to say the least. Last I knew it was being used as a sort of rooming house with offices on the first floor. Which, in modern day Michigan, there aren’t too many rooming houses– usually just apartments.

There was an offer to buy the place. The community got a bit upset over this piece of history being torn down (as was the potential-developer’s plans.) It’s a nice piece of real estate, near the down town area. We’ll ignore the fact that half of the down town is empty. This building is one of four Brighton buildings listed on the National Register of Historic Places. So, for whatever reason, the developer backed off and this quirky piece of Brighton history still stands.

One of the things I always thought was awesome was the spiral staircase in the rear. 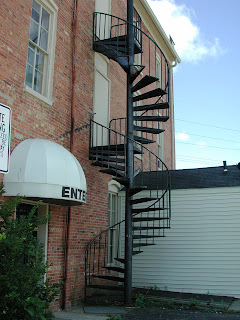 So… the title says “Pink Hotel” and here I’ve been talking about this lovely old brick building.

Well, somewhere along the way, some person thought it would be a good idea to put PINK SIDING on this building.

No, I’m not making that up. I wish I could find a picture of it. I’m too young to recall seeing it in pink siding… if it was still wearing the siding by the time I was in the area.

Luckily, the pink siding is gone. It’s still known as the Pink Hotel. And still a pretty building.

Travis Erwin rounds up all the My Town Mondayers. Check em out.