User error is not a design flaw.

But some people are adamant that because the “new” roundabout(s) in Brighton are bad. Furthermore, these same people contend that all roundabouts are bad and we shouldn’t have them in Michigan. 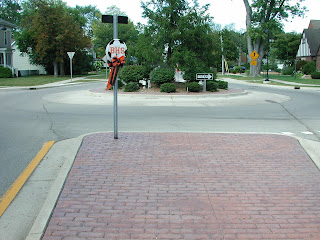 Here is the little roundabout at Main and Third Street in downtown Brighton.

Simple, unassuming little roundabout. When it went it, it was the first roundabout in the area. And I mean, really. One of the first in Michigan, too. A new, novel, dreadfully frightening thing.

And years later, people are STILL whining over how awful they think (the) roundabouts are. 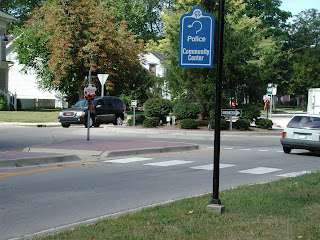 The first is that the roundabout is confusing and it’s too hard to learn it.

The Main Street roundabout is very basic. Slow down, yeild to traffic in the circle, proceed when clear.

Ah, well there’s the problem. But rather than realize that the DRIVER who doesn’t slow down, pay attention, or yield is the issue, many Brighton citizens blame the roundabout. How dare the road commision put in a roundabout. Didn’t the road commision realize that slowing down (you know, going 25 in a 25mph zone) and paying attention (like hanging up the bluetooh iphone) just shouldn’t be expected from drivers. Tsk.

The other flavor of compaint is that no body does as they should in a roundabout. People on Main Street will often fly straight through the little circle without even a touch to the brake pedal. No yeilding, and sometimes I’m not sure they even see if there is anyone in the circle.

Again, this is clearly the fault of the road commision.

Whenever discussin of the roundabouts comes up, as it often does for some reason, I keep reiterating that user error does not equal design flaw. I usually win.

Then someone mentions the Lee Road roundabout. And I have nothing more to argue.

Come back next week to read about that delight.

For now, tell me, what do you think about roundabouts? Do you have them where you are?

Do you find yeilding to little rusty cars a problem? If so, I’d like your name and address. I’ll be coming for you… I mean… um. Drive safe– keep it between the ditches.

And thanks to Travis Erwin. See him for More My Town Monday links.