In Livingston County, there’s usually more than one good route to get from one town to the next. Some rural areas have only a few routes between areas, but much of Livingston County is connected by paved (more or less) two- lane (ish) roads.

The older and more curmudgeonly I get, the less I like the main roads of Livingston County. I don’t like driving on Grand River for long stretches between Brighton and Howell. Too many idiots in their fancy cars with their fancy phones distracting them from the overspending they’ve just done at one of the too many retail centers in the area. I’ve checked my car and it doesn’t appear invisible to my eyes… 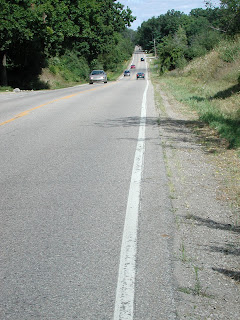 So, I’m learning more of the “Back roads.” Growing up, I knew there were at least three ways to get into Brighton from points south–Brighton Rd, Brighton Lake Rd, and Rickett Road. Rickett’s the most fun since it’s completely straight. It’s also a deer magnet. And the site of the my impact with said quadraped.

<-Rickett Road On the back roads, I can relax. I don't have to worry as much about being run over by someone who fails to notice the little car in front of them. I can listen to my music, talk out dialogue for the next story, and just enjoy the drive. There’s no rush. I can look at old architecture on the houses and take in the scenery. 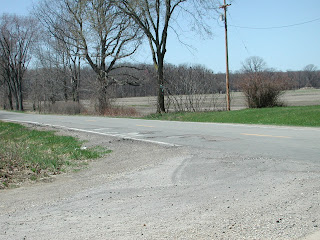 And yet, given the opportunity (and excluding peak traffic times) I’d just as soon get on the expressway than wind through most the major roads of the county. I also don’t care for dirt roads– too much sliding of the car.

I don’t like spending too much time in the car. But if I’m going to be there, I may as well enjoy the drive, one way or another. Preferrably with some good tunes playing and no other drivers trying to play Monster Truck Rally with me.

How do you like to get about your town?