As a Midwest Town and Michigan town, the weather around Livingston County spans a pretty good spectrum. Usually, it stays pretty mild. Being surrounded by a few large lakes helps take the edge of the weather.

So, for a “typical” summer day like today, it’s about 73 degrees–which is right within the range of my optimum operating temperature. My AC doesn’t even kick on in weather like this. I’d open the window if my paper-covered office didn’t flutter about.

We occasionally get temperatures shooting into the 90s and sometimes 100s. Being out here where it’s still more green than blacktop, it’s always a bit cooler in Livingston County than it is in places like Flint, Ann Arbor, or Detroit.

Currently, we’ve got some sort of hot and cold air collision happening just West of Michigan that’s made for some interesting rain and thunderstorms lately.

I stole this picture off the local paper’s website because I didn’t happen to have my camera when this happened last summer. I’m sure folks have all seen pictures of busted fast food signs– I know I have. But every other time I saw them, they were from news footage of Kansas or Florida or something. Not in MY town. 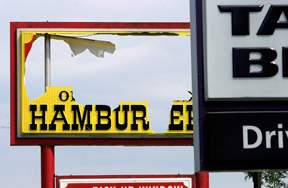 No idea what exactly happen to the sign, but a nasty thunderstorm went through the town earlier that morning, making quite a mess of the area. There’s still a few broken signs and other debris. Power was out in the center of town all day– I was working my retail job and it was quite surreal because we were running on generator. But I was working in receiving unloading trucks, and we had all our lights, power and were otherwise running as normal in our corner of the store. Then I’d turn to go down the hall and it’d be pitch black. Or I’d go to the sales floor where only one out of every tenth light was on. Surreal is the best word for it.
The broken Wendy’s sign has been removed, leaving the empty frame. And beneath it, they’ve got a sign that says “Ouch. Yes, we’re still open.” I laughed. Even if I am mad that they now only offer fried chicken on their salads instead of the grilled chicken.
Quite a few thunderstorms have rumbled their way through the county lately. Including one that was heading northeast and passed right between Brighton and Howell as Hubby and I drove home the other day. As we’re heading down the road, it started raining, then raining HARD, then hailing. Then, we go around a corner and it stops raining. Then, not even an 1/8 of a mile further, we round another corner and it’s raining again.
And today. As I was busy at work on the NEW old computer that replaces my old computer (which was suffering dreadfully from narcolepsy) I heard it raining. But, no, because I could see the sunlight glinting off my pretty computer monitor. Though, it sure did sound like it was raining. So I took a peak. 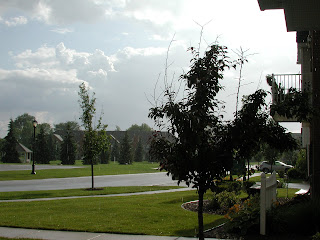 You can see the sun, and the wet ground. It was very much raining. And the sun was shining just a bright as can be.
Of course, I was standing outside with my camera hunting for rainbows. Almost makes me wish Hubby hadn’t lost the umbrella by leaving it under a desk at college one day. Except I would never purchase an umbrella.
But once I went back inside as the rain picked up, the rainbow came out. I peeked out the window just to see and there it was in all it’s prismatic glory. So I grabbed the camera, ran downstairs, opened the door, turning the camera on as I went. I aimed at the sky, but the rainbow had already faded. 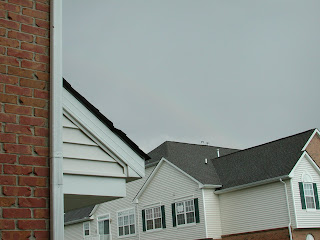 It really is there. Very faint.
I’ve grown to enjoy summer thunderstorms. I’ll admit that I used to be a big scaredy cat when thunderstroms rolled in. But as I’ve been living much closer to town than I did growing up, I’ve taken comfort in the proximity of tornado sirens. They tell me when to panic.
So, I finally understand my family’s fascination with standing with noses pressed to the window to watch sideways rain and green skies and trees whipping all over the place. In my current residence, I don’t even have to worry about the trees. (Scroll back up to the second picture and see just how big the trees are around here. Yeah… I think even the birds scoff at these trees.)
This is summer weather in it’s finest in Livingston County. Warm days, a few thunderstorms and rain showers to keep things cool, low humidity, and not much on the itinerary. It all looks great from inside. Where I’ve happily got most everything back on my computer– especially my customized version of Word 2003. Yep. All is good.
reposted with persmission